Report from the Observation Mission of the Public Consultation in Juchitán, Oaxaca

– The report presents violations of the principles governing the right to consultation, such as: the consultation should be informed, culturally relevant, transparent, free of charge, and in good faith, and it must adhere to the highest international human rights standards.

– The Observation Mission is concerned about the lack of clear and transparent mechanisms in decision-making that have created an atmosphere of confrontation between the parties.

– The occurrence of security incidents against participants is one of the most serious issues identified by the Mission during the development of this first stage of consultation.

The member organizations of the Observation Mission during the consultation phase, dubbed “Prior Agreements” for the development of a wind project from the company “Eólica del Sur,” formerly “Mareña Renovables,” in the Zapotec community of Juchitán, Oaxaca, present this report from the first week of the consultation for the implementation of a wind project in Juchitán.

In order to ensure that the consultation is conducted in compliance with the highest international standards in human rights from an objective and impartial position, the member organization of the Observation Mission noted several violations of the principles governing the right to consultation, such as: to be informed, culturally relevant, transparent, free of charge, and in good faith.

Some of our observations are:

• The explanation of what is a free, prior, and informed consultation was provided in different ways, being in some areas more broadly than others. The amount of printed protocols was insufficient and several participants did not know that the document presented was still under review, and therefore subject to modification.

• As for the translation and interpretation, they were not conducted properly and even some participants of the consultation were the ones who had to fill those roles. At other times, the translators did not limit themselves to interpreting and translating; instead, they provided comments on some of the opinions of the participants. Furthermore, certified translators were not guaranteed and not all sessions had translation.

• One of the most worrying aspects was the lack of clear decision-making mechanisms. Most of the sessions were defined by a hands-raised vote that allowed some groups who attended the end of the session to vote and, thus, make the agreement favorable to their interests. Similarly, the lack of a clear definition of who is eligible to vote resulted in some episodes where people voted without being registered with the groups invited to the Consultation.

• The Observation Mission is concerned by the risk of confrontation, since this dynamic has included verbal confrontations between the various groups involved. Also, there is no clarity about how decisions are going to be taken in the later stages of the process or what mechanism will be used to define the community’s position before the implementation of the wind project.

• The security incidents are the most serious aspect of this first stage. Members of the Popular Assembly of the Juchiteco People (APPJ), the Assembly of Indigenous Peoples of the Isthmus of Tehuantepec in Defense of Land and Territory (APIIDTT), and the Community Radio reported that during the sessions there were harassment, direct threats, and security incidents related to their participation in the consultation process. The facts have already been reported to the government representatives who acted as guarantors of security in this process. However, there is still no clear mechanism to ensure that such incidents do not occur again.

Given that our aforementioned concerns stem from violations of principles governing the right to consultation under Convention 169 of the International Labour Organization, the Declaration of the United Nations (UN) on the Rights of Indigenous Peoples, and the jurisprudence of the Inter-American Court on Human Rights, the Observation Mission makes the following recommendations:

• That the translation and interpretation be performed by certified translators during all stages of the consultation process;

• All participants should be provided sufficient information about the scope, limits, and implications of the consultation process in a proper, complete, and consistent way for each of the sessions;

• Clear, explicit, and inclusive participation mechanisms must be established;

• Equal conditions for participation should be guaranteed for all attendees; and

• Safety measures must be implemented for all participants in order for the consultation to develop freely and in good faith, without harassment or intimidation. 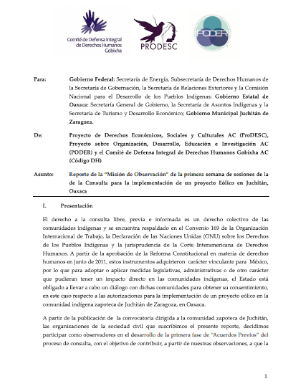