CSOs request investigations of Almaden Minerals in the U.S. and Canada for concealing information from investors

CIVIL SOCIETY ORGANIZATIONS REQUEST INVESTIGATIONS OF ALMADEN MINERALS IN THE U.S. AND CANADA FOR CONCEALING INFORMATION FROM INVESTORS

– The Canadian company breached the disclosure requirements of financial regulators at its gold and silver mining project in the Sierra Norte of Puebla, Mexico.
– Local opposition and lack of respect for the human rights of affected people, including consultation with indigenous communities, among the issues not disclosed to investors.

Mexico City, May 23, 2017.– A coalition of civil society organizations has requested that U.S. and Canadian securities regulators investigate whether Canadian-based company, Almaden Minerals, violated the disclosure requirements that companies listed in these markets must meet by not disclosing key information about the gold and silver exploration project known as the “Ixtaca Depot,” in the municipality of Ixtacamaxtitlán, in the Sierra Norte de Puebla.

The rules governing public companies in both countries state that companies must disclose information of decision-making importance for investors. However, Almaden Minerals has not reported in its public announcements on four vital aspects of the Ixtaca project:

In letters addressed to securities regulators in British Columbia, the province where Almaden Minerals is located, and Washington, DC, four civil organizations – Center for Rural Development Studies (CESDER-PRODES), Union of Ejidos and Communities in Defense of the Earth, Water, and Life, Atcolhua, Mexican Institute for Community Development (IMDEC), and Project on Organizing, Development, Education, and Research (PODER) – request investigations of the mining company arguing it stated that the exploration in Ixtaca “continues apace, with no mention of recent federal regulatory and judicial actions that have slowed or threatened to halt activity on the site.”

These organizations point out that the company has repeatedly stated the importance of maintaining positive relationships with local communities, “but fails to mention that many residents of affected communities are actively working to stop the project.”

Almaden Minerals intends to process 7,500 tonnes of mineral per day at the Ixtaca site, which means that after 13 years of the mine’s life about 36 million tonnes of rock will be extracted to produce just 49 million ounces of gold and silver, leaving a mining pit of 1,000 meters of diameter and hundreds of meters of depth. 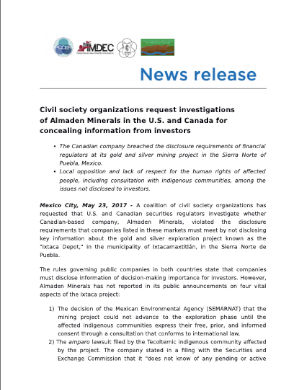 Civil society organizations request investigations of Almaden Minerals in the U.S. and Canada for concealing information from investors