0
0
0
0
0
0
0
0
0
0
0
0
0
0
0
0
0
0
0
0
0
0
0
0
Corruption can be fought if different agents and institutions around the world work together. This declaration consolidates an alliance to work
across borders to promote whistleblowing, and calls on governments,
legislative and judicial powers, the media and policymakers to pay
urgent attention to the effective protection of whistleblowers around
the globe.
Around the world, and especially in developing regions, corruption and
environmental crises have proved to be closely related. In one case –
the Brumadinho catastrophe in Brazil – deficient regulation of mining activities caused over 200 deaths and impacted on both the Amazonia forest and water reserves. It is clear that the effects of negligence, malpractice and crimes are destroying our natural resources and taking human lives.
Whistleblowers are key in preventing events like Brumadinho. They have been widely recognized as important actors in the defence of democratic values such as transparency and accountability, as well as in the fight against corruption. Over the past 10 years, whistleblowing has
repeatedly shaped the agenda as whistleblowers have revealed wrongdoing in public cases that have fostered discussion and involved
an increasing number of human rights actors.
Civil society plays a central role in the strengthening of our democratic
institutions and our civil and human rights. In several Latin American countries, these organisations were (and still are) key actors in the fight against the impunity of human rights violations committed during dictatorships.
The success of civil society advocacy in Europe – which has helped shape effective and comprehensive legislation in the form of the EU Directive on Whistleblowing and in national jurisdictions – demonstrates
how coordination and collaboration between organisations based in different countries can improve the protection of those reporting in the public interest. Non-governmental organisations, trade unions, research institutions, investigative journalists and the media are key elements in this change.
Our organisations will work together to share experiences, support, and raise awareness among civil society in Latin America, collaboration across jurisdictions to combat corruption and impunity. Starting in countries such as Mexico, Chile, and Argentina, we aim to work across borders and for our efforts to be cross-disciplinary, bringing a range of complementary skills and expertise to our fight against corruption.
On April 1st, 2019 in Valencia, we agreed on a shared agenda to help us move forward and co-ordinate our activities. In the upcoming months, different meetings will take place around the world to foster whistleblower protection in both regions.
Ciudadanía Inteligente
Fundación Internacional Baltasar Garzón (FIBGAR)
Cátedra de Transparencia y Gestión de Datos – Universitat Politècnica de València Mathematics and Applications to Data and Physics (MADPHY)
Proyecto sobre Organización, Desarrollo, Educación e Investigación (PODER) Whistleblowing International Network (WIN) Whistleblowing-Netzwerk Germany
Blueprint for Free Speech
Maison des Lanceurs d’Alerte – France
Agència Valenciana Antifrau
Associazione Hermes – Gloableaks Project
Freedom of the Press Foundation
William Bourdon
Platform to Protect Whistleblowers in Africa (PPLAA)
Photo: FIBGAR 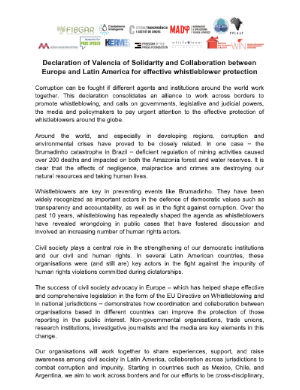