We share the statement of the Union of Ejidos and Communities in Defense of Land, Water and Life, Atcolhua adressed to Almaden Minerals’ investors.

Northern Highlands of Puebla, June 28, 2021. We, the members of the Union of Ejidos and Communities in Defense of Land, Water and Life, Atcolhua, call on the investors in Almaden Minerals (TSX: AMM; NYSE: AAU) to reconsider their position on this project of death at the Annual Shareholders’ Meeting on June 29th. We are in favor of projects of life and they will never have any social license to operate!

As you may know, the Ministry of the Environment and Natural Resources (SEMARNAT) rejected with strong arguments the Environmental Impact Assessment presented by Almaden. Now, the members of the Affected Communities are calling the investors in Almaden Minerals to reconsider their position on this project and take into account the following points regarding the Annual Shareholders’ Meeting:

The project will never have the trust or environmental and social merits in Ixtacamaxtitlán. There is no feasibility and we are not interested in weaving any ties with the company. The water we have is scarce and we will defend it despite the company’s fantasies about new sources and “economic prosperity”. We decide what is prosperous or not from our own vision. There is NO way we will give our consent. It doesn’t matter if they resubmit a new proposal or Social Impact Assessment. NO IS NO.

Despite the fact that some people (leaders) from the community of Santa María, where the mine is intended to be built, have been co-opted, most of the surrounding communities have shown their disagreement and rejection of the mining project, but also communities and municipalities that live on the banks of the Apulco River have also shown their rejection. So it is not only a community rejection, but a regional one.

In recent years we have sought institutional causes to demand respect for our human rights, and we are fighting Almaden Minerals’ mining concessions in the area through legal channels and will continue to do so until our region is free of concessions.

Be clear that as time goes by, our struggle and our opposition to the mining project becomes more robust and we suggest that you do not continue to invest your capital in it, because as we have demonstrated, we will not let the project go through and you will lose your investments.

We repeat, there is no relationship between the company and the communities that defend life and territory.

For the self-determination of peoples, yes to life!

Union of Ejidos and Communities in Defense of Land, Water and Life, Atcolhua. 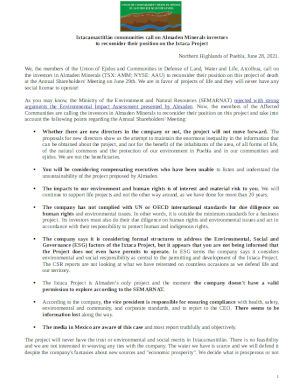