Hermosillo, Sonora, April 21, 2022.- On April 8, 2010, the Sonora River Watershed Committees (CCRS in Spanish), the movement of people affected by the heavy metal spill caused by Buenavista del Cobre in 2014, met with federal and state authorities to follow up on the dialogues regarding the search for remediation and non-repetition for the communities of the Sonora and Bacanuchi rivers, within the framework of the so-called “Justice Plan for Cananea”.

Representatives from the National Center for Disease Control and Prevention Programs (CENAPRECE), the State Commission for Protection Against Health Risks of the State of Sonora (COESPRISSON), the Ministry of Labor and Social Security (STPS), the Mexican Institute of Water Technology (IMTA), the National Water Commission (Conagua) and the National Institute of Ecology and Climate Change (INECC) participated in this meeting.

During the meeting, the general results of the urine and blood tests that were performed on nearly 1,500 people in November, a technical report on environmental contamination prepared by INECC, progress on the pending water treatment plants for all the communities, and the presentation of the central axes of the justice plan were shared.

Health analyses confirmed the presence of heavy metals in the inhabitants of Arizpe, Banámichi, Huépac, San Felipe, Aconchi, Baviácora, Ures and rural Hermosillo. According to the authorities, there is homogeneous and constant exposure to lead in more than 95% of the population, to arsenic in more than 50%, and to cadmium in more than 79%. To this information we must add the percentages of population where “High Risk” and “Very High Risk” were detected, which range from 1 to 10% in each municipality.

Positive and elevated exposure to lead in blood was reported in percentages ranging from 58 to 90% of the population, exposure to cadmium in percentages ranging from 17 to 59%, and manganese between 18 and 50%. According to the authorities present, the presence of lead in urine and blood indicate recent and chronic exposure, respectively, to this contaminant, which makes it evident that the contamination of our water continues to this day. In the following days afer this meeting, CENAPRECE delivered individual results to the people who participated in the sampling. The results were alarming and confirm what we have been saying for almost 8 years: We live, eat and breathe in a polluted environment that puts the lives of our families at risk!

As a follow-up to this process, the Ministry of Health committed to work on an inter-sectorial proposal regarding the response to the specific attention and control of the Sonora River problem. The opinions and demands of the CCRS and the population will be integrated in this proposal. We hope that in this space the health authorities will detail how long the health services will be operating to address the problem of the Sonora River, as well as the specific plan for the short, medium and long term. Likewise, we seek that they address the modalities of free care that will ensure the constant monitoring of all those affected.

INECC measured metal and metalloid values in 14 communities throughout the watershed, including Cananea. High mercury levels were found in the air in Bacoachi during the month of February. Chronic exposure to mercury can cause severe health damage. It is important to note that mercury is sensitive to temperature and its values rise with heat, this tells us that in the summer months the concentration of mercury in the air is higher.

The concentration of aluminum in the soil has changed over time due to the change in pH (acidity) in the area. Aluminum is one of the most toxic elements found in the soil; it does not occur naturally in the area; therefore, according to the authorities, it is a consequence of mining and its seepage into the watershed.

Insects were sampled as indicators of environmental contamination and it was reported that because mining increases the presence of metals such as aluminum, manganese, cobalt and nickel, it has reduced species diversity. This alteration mainly affects crops as it makes them more prone to pests and affects pollination.

An economic report was also presented, where INECC estimates around 4 billion pesos of economic impact in the region by 2022, almost 1 billion pesos more than estimated in 2014. A full report on losses in agriculture and livestock will be available soon.

Following up on our observations and based on the diagnoses prepared by specialized water technicians, IMTA presented the necessary budget for the rehabilitation, operation and maintenance of the six water treatment plants (Bacanuchi, Banámichi, San Felipe de Jesús, La Capilla, Mazocahui, San Rafael) located on the Sonora River, of which only two operate intermittently. In previous meetings we have positioned ourselves against the four mobile plants (Arizpe, Huépac, Aconchi, Baviácora) being used; this is because previous experience with their operation has shown that they are not sufficient to supply a population, much less to guarantee the human right to water in the basin. In view of this, the authorities mentioned that the mobile plants would be replaced.

The CCRS insist that 10 water treatment plants are not enough for the entire basin, as demonstrated by the information presented by authorities due to the extent of the spill. Many of the towns where heavy metals were detected in the water do not have water treatment plants, nor were they considered when they were installed in previous years. The rural populations of Hermosillo have been ignored and are just as much of a priority as the towns in the middle and upper watershed. The authorities promised to follow up on the need to install water treatment plants at each site that represents a risk.

Justice Plan for the Sonora River

As CCRS we demand that the STPS reconsider the way in which this Plan is presented to the population. The problems derived from the 2014 mining spill need to be duly made visible, for which reason we demand that the Sonora River be written and included in the name of this Plan and that the corresponding axes be clearly aimed at precisely addressing our problems and, above all, recognizing them. The environmental and health studies presented have shown that both the region of the Sonora River and Cananea have serious contamination problems, but we cannot overlook the fact that in the mentioned areas there are different cases with stories of injustice, cases that need to be named in a particular way and specifically addressed. Our demand is not to embellish the name, it is so that history and the communities remember that in the Sonora River there is also a struggle for justice.

The CCRS will continue to be open to dialogue with the authorities to demand the fulfillment of these commitments and the solution to pending issues, such as the need to establish precautionary measures to hasten the protection of our rights. As always, we celebrate the government’s approach, the honesty with which they have presented the data, and the necessary follow-up to resolve this problem that every day attacks more and more our way of life, our stability, and the future of this territory. 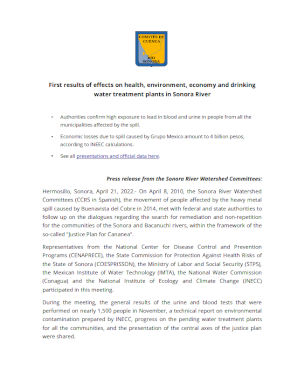