August 6, 2022, marks eight years since the Sonora and Bacanuchi Rivers were polluted with 40 million liters of acidified copper sulfate from a leachate pond at the Buenavista del Cobre mine, owned by Grupo México, the world’s third largest producer of copper, directly affecting 22 thousand people in eight municipalities, their health, the ecosystem, and the economy of the state of Sonora. The Mexican government (2012-2018) considered the spill the worst environmental disaster in the history of mining in Mexico.

Due to the magnitude of the environmental disaster, in the year 2014, residents of the municipalities affected by the spill organized and formed a movement to seek justice and compensation. The collective, named the Sonora River Basin Committees (Comités de Cuenca Río Sonora CCRS), is made up by people from eight municipalities: Arizpe, Banámichi, Huepac, Aconchi, San Felipe de Jesús, Baviácora, Ures, and rural Hermosillo. Their movement is accompanied by the civil society organization specialized in corporate accountability Project on Organizing, Development, Education, and Research (PODER).

After eight years of peaceful struggle against the giant conglomerate controlled by German Larrea, the CCRS have gained the recognition of local and international authorities and public opinion and have emerged as an influential actor working to shift the balance in response to the disproportionate corporate abuses committed by Grupo México.

After eight years of struggle, the voice of the CCRS reached the current administration and in 2021 and a series of dialogues and working sessions was launched to undertake this government’s first actions in pursuit of truth, justice, and compensation for the harm caused. It is in this context that, a year after initiating this process, the inhabitants of the Sonora River region now present an assessment of the actions undertaken by the federal government, in coordination with the communities, of the so-called Cananea Plan for Justice, which defenders have now rechristened as the Cananea-Sonora River Plan for Justice.

This new assessment presents for the first time – based on official information produced in response to the demands for justice put forth by the CCRS – the main findings on the real harm to human rights, health, the environment, the ecosystem, and the economy. These include the presence of massive amounts of metals like lead, arsenic, and cadmium in residents at different points in the basin, decreasing insect populations, and economic losses to the state of Sonora and Mexican society totaling 10.2 billion pesos – triple the amount initially estimated by the previous administration (3 billion pesos) and five times the amount allocated by the defunct Sonora River Trust (2 billion pesos), which in reality disbursed only slightly more than half that amount (1.2 billion pesos). Also, we present an assessment of advances and intentions of the current administration in pursuit of justice.

This new information shows that the version constructed by Grupo México, and embraced by the previous administration, does not hold up and a new plan is needed that includes actions leading to effective compensation for the harm caused, in the interests of corporate accountability and as a counterweight to corporate capture of the Mexican state. 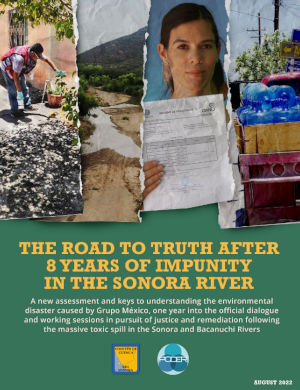 New assessment and keys to understanding the environmental disaster caused by Grupo Mexico.